For many years Donald Trump, has been a golf fanatic. His love for golf inspired him to start building and acquire golf courses in the year 1999. As at 2016 when he became President, the Trump Organization had acquired 17 golf clubs around the world. This includes 12 golf courses in the United States, 1 in Ireland, 2 in Scotland, 2 in Dubai, and planned courses in Indonesia.

Trump’s golf courses have been selected to host different LPGA and PGA events, including the imminent 2022 PGA Championship. Two of Trump’s courses are in proximity to his Mar-a-Lago private club situated in West Palm Beach, Fla and this is where the president plays much of his golf in the winter. He also spends lots of time at his other best golf clubs in Sterling, VA, which is just 20 miles from the White House. Additionally, Trump loves staying at his Summer White House at the Trump National Golf Club located in Bedminster, N.J. 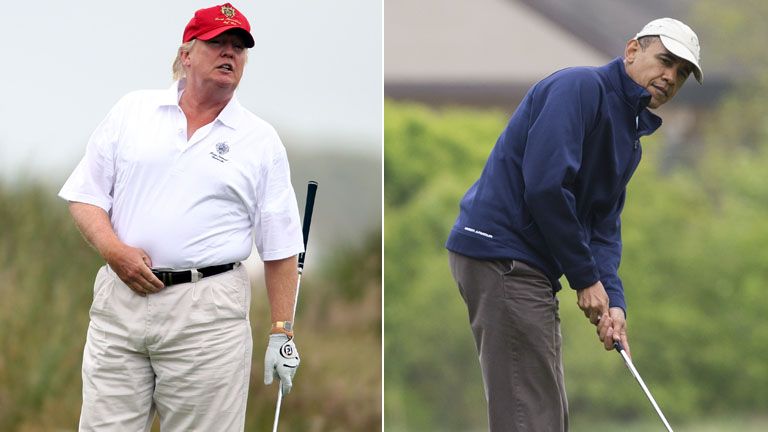 Trump has been criticizing his predecessor Barak Obama several times for playing too much golf when he was president. However, President Trump golfed 11 times in his first eight weeks as President, while Obama did not golf during his initial 8 weeks.  According to the Golf Digest, Obama played 306 rounds of golf during his two terms as president and according to the magazine, this is a fairly notable amount of golfing while he was in office.

As stated by CNN, the president has visited his golf courses about 92 times between January 2017 and January 2018. However, the White House does not give any information when Trump actually plays golf during his visits to any golf course. In some instances, his administration has even denied his involvement in the sport. This is even after photos of the president published on Social media platforms showed him playing golf or in golf attire.

Regardless of the number of times that Trump has played golf, it is clear that he has spent more time golfing when compared to Obama. In addition, his golf-related ‘carbon footprint’ is definitely bigger than Obamas even if you only count the air travel.

According to the Washington Post, for Trump the number of days between golf games is 5 days, while that of Obama is 12 to 13 days. Since his first day in office on January 20th, 2017, Trump has reportedly been to his golf courses or played golf 293 times by September 27, 2020.  According to his pace since August 6, 2018 it seems that Trump will spend almost 745 days of his presidency at a golf club if he wins his second term and completes both terms.

In his first year of being President in 2017, Trump visited the golf course 91 times. Trump also played golf 76 times in 2018, his second year in office.  Trump has spent about 22% of his days as president at one of his golf clubs for a few hours of the day.

President Trump has played golf with famous people, his friends, and for diplomatic and political purposes. The frequency of his golfing is not a problem just like it was with former President Barak Obama.  We believe that being a president is an overwhelmingly challenging job and the president is entitled to getting time off work to unload. In retrospect, Trump looks more hypocritical since he is spending more of his time playing golf when compared to President Obama whom he was criticizing.